In May 2014, on the occasion of a Class Reunion in San Antonio, Texas, a group of my 1962 US Naval Academy Classmates asked me to give a talk at San Antonio’s Vietnam Veterans Memorial. The site was the statue depicting a scene from a battle at Hill 881South. This particular Hill was one of the main battle sites of Operation Beacon Star in the Republic of Vietnam during April and May 1967. This operation has come to be known as the ’67 Hill Fights”.

I am honored to be here today to tell you the story of the battle commemorated in this memorial. Marines are usually reluctant talk about the details of battles they fought but sometimes, in the interest of ensuring that history is accurately preserved, it becomes necessary to speak publicly. We are standing here before this beautiful memorial that depicts an actual scene on Hill 881 South as recalled by Austin Deuel who was a Marine combat artist and served on that hill during the ‘67 Hill fights. The artist depicts a Marine radio operator attending to a wounded comrade. I might add here that the Deuel may have used artistic license in the depiction because the typical Marine, mine included, carried significantly more equipment on his back.

In early 1967 the NVA started moving major units into the area around Khe Sanh, perhaps in preparation for an all out strike that they finally achieved in the 1968 Tet Offensive. Some years after the Hill Fights, I was asked if we won the battle. I replied that to properly understand this battle, and here I am not talking about the whole war, one must understand the mission. The Army (Gen Westmoreland) ordered the Marines to hold the Khe Sanh Airfield. About that time, our Classmate Navy Seabee Don Woodford was engaged in reinforcing the runway with Marston Matting. The battle was kicked off by First Battalion, Ninth Marines who took very heavy casualties in the hills when they came upon North Vietnamese units massing for an operation of their own.

The airfield was critical to sustaining the friendly units holding the roads in this area. To keep the airfield open, the Marines needed to control the high ground which included Hills 861, 881 North and 881 South. Occupation of Hill 861 was a critical to the capture of both of the higher hills. 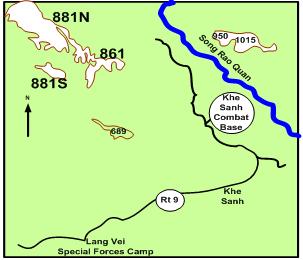 The battle was about the high ground, specifically Hills 881 North, 881 South and 861. At the end of the battle, we held the high ground. The Marines accomplished their mission.

For us the battle started on 26 April 1967 when we were helo lifted from an operation on the coast line to Phu Bai airfield and then flown to the airfield at Khe Sanh. My worst day was on 30 April when Hotel Company lost nine Marines dead and 43 wounded. It is a day I will never forget.

I will also never forget how badly the M-16 rifles jammed on us. My Marines used everything possible to keep them clean and, as history relates, a later field modification to every rifle in Vietnam was needed to correct the problems we experienced. The point should be made that the rifle’s poor performance was not due to any negligence on the part of the Marine riflemen in keeping their weapons clean. This fact was later borne out by field tests and investigations thus disputing allegations to the contrary by MACV.

The rifle performed so poorly that, on 3 May 1967, I ordered a bayonet charge because, in part, of my lack of faith in that rifle. Hotel Company had circled around a hill where the NVA had pinned down Echo Company without alerting the enemy that we were behind them. The Marines of Hotel Company carried that charge out gallantly and captured the objective.

The battle lasted until 10 May 1967, a period of 15 days, when 47 years ago this day, I was relieved by Capt. Chad Dennis USMC a 1962 Naval Academy classmate who brought his company from the 1st Battalion, 26 Marines in on helicopters. During the battle another Class of ‘62 classmate and member of the Navy Football team, Capt. Jim Honeywell USMC of VMF-232 flew an F-8 Crusader in bombing strikes and on-call combat air patrol.

Body counts were submitted and are a matter of record in official after-action reports. The official Marine Corps history tells us that the number of friendly casualties 155 killed and 425 wounded. That same official Marine Corps history lists enemy casualties at 940 killed. No accurate estimate could be made of the number of enemy wounded because they either dragged them away or our artillery and air obliterated the bodies. The subject of enemy body counts has always been controversial.

I believe we won the ’67 Hill Fights because we held the ground and the airfield continued to operate. We accomplished our mission of clearing the hills and keeping the airfield in operation.

The Vietnam Veteran’s “welcome home” never happened. But years later, too late for some, grateful citizenry have been trying to make that up and this memorial is a prime example.

The legacy of the Vietnam Veterans is that, after our less than warm welcome home from the war, we rose up in many ways and spoke out, raising awareness and the consciences of the American citizens to the debt they owe returning service men and women for their service to our country. We also managed to raise public awareness of Post Traumatic Stress Disorder – PTSD.

I want to thank Mr. John Baines and his board of directors, which included a good friend of mine, Major Bill Stensland USMC, USNA Class of 1960, for creating this memorial. The original table-top bronze sculpture sits in Mr. Baines’ office. This memorial stands proud above the ground for people to see a tribute to the bravery of the Marines and Navy Corpsmen that fought and died there.
Thank you for your time. Semper Fidelis. 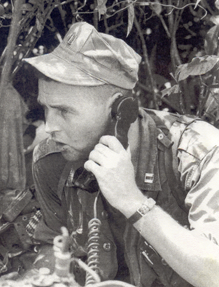 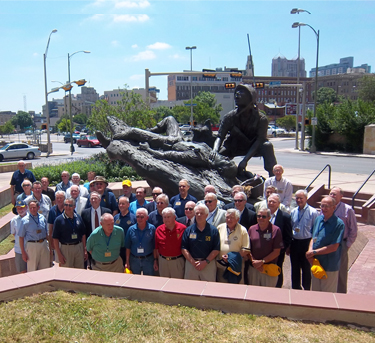 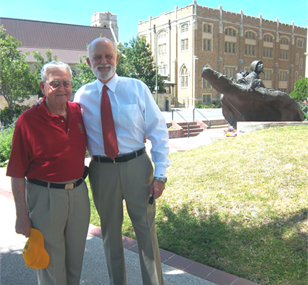