Veterans Memorial Plaza is designated as a central city location for the placement of military oriented memorials, plaques and statues. Additionally, this place of reverence is intended to be “hallowed ground” for military ceremonies and wreath laying vigils. Veterans Memorial Plaza is dedicated to the memory and sacrifices of those who served in our nation’s armed forces. Their willingness to meet and overcome the most difficult of tests will never be forgotten.

June 1986: Bob Hope performed a USO show at the Municipal Auditorium to raise funds for the development of Veterans Memorial Plaza. 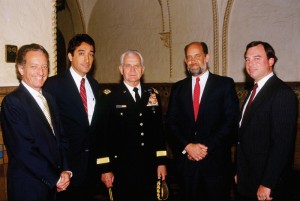 April 30th 1987: A ceremony commemorating the 20th anniversary of the battle for Hill-881 South, the battle depicted in San Antonio’s Vietnam Veterans Memorial, was held at Veterans Memorial Plaza. A number of the Marines and Navy Corpsmen that participated in the battle were in attendance.

July 28th 1988: General Alfred M. Gray (29th Commandant of the United States Marine Corps) was the keynote speaker at a ceremony at Veterans Memorial Plaza. Sergeant Major David W. Sommers (11th Sergeant Major of the Marine Corps) accompanied General Gray. The Commandant and his staff made a special trip to San Antonio to visit our Vietnam Veterans Memorial, because it depicts the battle for Hill-881 South, a Marine Corps engagement. 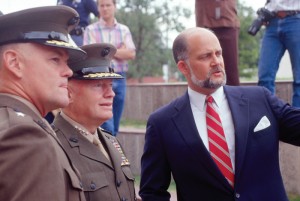 April 30th 2007: A ceremony commemorating the 40th anniversary of the battle for Hill-881 South was held at Veterans Memorial Plaza. A large contingent of Marines that participated in the battle, their families and friends attended.

May 10th 2014: The United States Naval Academy – Class of 1962 – held a ceremony at the Vietnam Veterans Memorial to honor their classmates that died in the line of duty. The speakers were Capt. Don Allee, USN (Ret.); Lt. Col. Ray Madonna, USMC (Ret.); and John D. Baines.

“Death at my Door”

Day is over and danger hastens
Young Marines at their battle stations
Instruments of war outline the sky
Means of death are standing by
Can it be true on this high hill
Forces will clash only to kill?

Silence fills the near moonless night
Restless thoughts of a bloody fight
Endless memories for those awake
Meaningful discussions experience would make
Though silent world in which we live
Permit only God’s comfort to give.

Somewhere through the darkness creeping
A date with death is in the keeping
Alone I sit and question why
Life itself to be born to merely die?

Lieutenant Rogers’ poem is inscribed on the base of San Antonio’s Vietnam Veterans Memorial. 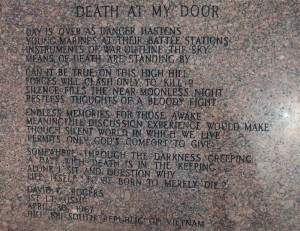 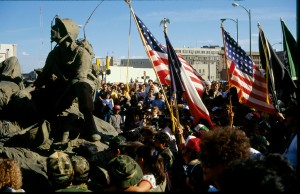 Veterans Memorial Plaza and the Vietnam Veterans Memorial were made possible by private contributions from more than 130,000 Americans. Nickels, dimes, quarters and dollar bills funded this tribute. The average contribution was $5.00. This was a classic grassroots fundraising effort. The “man on the street” can shoulder full credit for this inspiring tribute to the memory and sacrifices of our veterans.